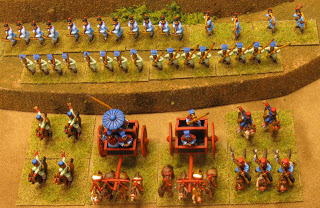 At the same time I bought the Mountain Indian DBA army from Museum Miniatures, I also got a pack for II/4a, Warring States: Ch’in Chinese. 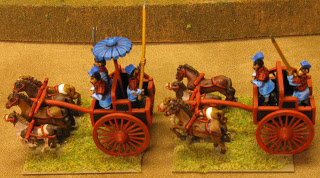 The Ch’in or Qin dynasty was formed in the latter part of the 3rd century BC. The first (and only) Ch’in emperor, Qin Shi Huang, is famous for completing the first version of the Great Wall of China, standardizing the written Chinese language, and for his excessive but very archaeologically useful burial of over 8000 life sized terra cotta warriors.

The period of civil war that led to the Ch’in Dynasty was called the Warring States period for obvious reasons.  When the emperor died in 210BC, China fell back into civil war for a shorter period, and the Han dynasty emerged. 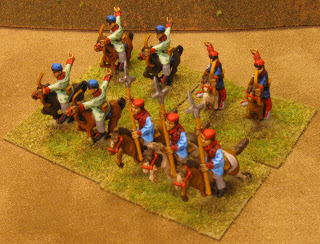 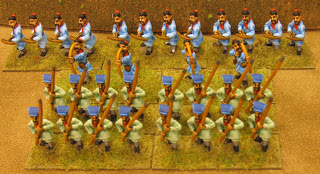 In a later order to Museum, when I was ordering some Mongols, I threw in a DBA army pack of II/4c: Chao, since I was ordering overseas (and they were on sale). The biggest difference between the armies is that II/4a has 4x4Wb, and II/4c has 4x4Sp.  Ch’in soldiers are classified as warbands because they were particularly brutal on the battlefield, due to the fact that they were rewarded based on the number of enemy heads they collected during battle.

For some reason, both packs came with the same spear figures for the 4Wb and 4Sp units.  Since they are enemies of each other and have few other enemies, I think this would be very consfusing in a matched pair game.  So, although I started painting II/4a, I finished painting II/4c until I get some halebard figures to use as warband.

Unforuntately, Museum has a limited selection of Chinese figures.  I’d like to see a sword carrying figure other than the general, to build a proper blade unit for some of the warring state armies. The figures seem very well suited to the Ch’in chinese, but Museum uses the same figures for everything from 1100BC to 189AD, which is pushing it a bit.

I am extremely happy with the way this army turned out!  I think it’s one of the prettier armies I’ve painted.  Some of the faces on the spear and cavalry elements are a bit muddy, but overall the colors came out clean, it pained up quickly, and it looks great.

When my halebards come, I’ll paint them up, and I’ll have enough elements to field either II/4a or 4c, and probably a few other Warring State armies.  I also ordered enough supplemental figures to field a double II/4c, or Han Chinese using the same figures.

To paint the light blue and light green, I used a very light blue/green base coat, and mixed a wash of darker blue/green paint.  The wash is approximately 1/3 acrylic paint, 1/3 water, and 1/3 gloss varnish (Delta Ceramcoat brand, water based craft varnish).  I test for flow and coverage on my palette or an old figure, and adjust the water and varnish proportions until it flows the way I like it.  When it’s working, it does a good job of filling in the low spots while leaving the high spots lighter.  In the end it only requires a bit of touchup on the highlights and it’s good to go.

I’m not as fond of painting chariots.  Thes turned out well, especialy the red parts, but it’s not my favorite.  I used more different hair color patterns on the horses, which also turned out fairly well.  But the crossbowmen, spearmen, and archers were my favorite to paint here despite their very uniform appearance.

This army just collected its first win, in a solo match versus my Skythians.  I really like the balance of elements in the Chao army, but I was really hoping I’d learn something about how not to lose with the Skythians, since Battle at the Crossroads is coming up next weekend.