Tonight at Legions DBA night, we played BBDBA.  It was my first time playing a “proper” BBDBA game by the Rules As Written.  I brought my Later Achaemenid Persians (II/7), and we decided by a roll of the dice that my Persians would face Jim’s Yuan Chinese (IV/48).  Another roll of the dice put Rich on Jim’s team, and Steve on mine.

I put some thought into this game before I got there, but not a lot.  I anticipated the possibility of facing Steve’s Hundred Years War English, which would present a vast array of new tactical problems: lots of artillery and bows.  It was different enough from anything I’ve faced so far that I felt I’d have no chance of winning (but many opportunities for learning from my mistakes).

That turned out not to matter, but the Yuan Chinese presented another challenge: even more cavalry than my Persians. My main pre-planning went into how to split my army into commands that had optimal break points and well-defined tactical purposes.  I settled on a 16 element high-pip command consisting of 8 cavalry (and light chariot), 6 light horse, and 2 psiloi; a 13 element low-pip command consisting of 9 spear, 3 psiloi for rear support, and the C-in-C (cavalry); and a 7 element mid-pip command with 3 Auxilia and 4 Psiloi in an active role.

When it came to playing the game, 7 elements seemed small for a mid-pip command, and I was convinced it was better to put 2 psiloi back from the high pip command into the mid pip.  Jim broke his side’s command into a high pip command consisting primarily mounted but with a bit of bad going support; a low pip all-mounted command; and a mid pip foot command with a bit of mounted support.  The aggression roll made us the defender, and I placed terrain as seen in the accompanying pictures.  I left a wide open space for my spear wall, with enough bad going to anchor its flanks and room for the cavalry to play on the sides.

Next came deployment.  We deployed the spear wall in the obvious open space in the middle, and the bad going troops to the left, with our cavalry in reserve.  In retrospect, there was only one good place to put the cavalry, so we should’ve placed that first, instead. It’s also fastest, so if we had placed it incorrectly it’d be easier to move than the foot.  If we placed the bad going troops last, they could have reinforced either of the spear’s flanks as necessary.

The first picture shows the board after the first turn, which is very similar to our initial deployment (our side on the bottom).  At this point, I basically knew I was screwed and should just immediately give up.  My cavalry was far outnumbered on my right flank, both in number elements and in number of pips, since he had two commands playing against one of mine.  Another major concern was the fact that I attempted to anchor my spear’s right flank on the woods, but I didn’t provide any bad going troops to secure it.  The gap between my cavalry and spear was wide, and a huge problem, since it was big enough for the enemy foot to flank my spear, and my horse could do almost nothing to help.

I’d hope that a Real general in my position would mount an orderly retreat and return to fight another day. But historically, Darius III only ever routed in a very disorderly fashion after Alexander turned his flank, so we decided to let the Yuan play the part of Alex this time around.

From here on out, the battle went very predictably, but it was accelerated by Jim’s excellent die rolling skills.  He had multiple turns in a row where the low-pip command had 4 pips, and was consistently rolling 5’s and 6’s in combat as I rolled 1’s.  Blame it on the dice, I always say!  No, it’s better to learn from my mistakes, instead.  “Oh no, not another learning experience.” 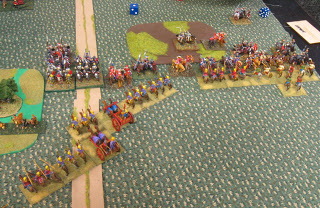 The beginning of the end came on the right flank.  I advanced in an attempt to isolate individual cavalry elements before they left the steep hill and regrouped, and wheeled to the left to defensively increase my frontage against Jim’s line.  It didn’t work: he punched a hole in my light horse with his cavalry general, and was able to exploit it.

The big mistake I made here was deploying my light horse too far to the flank and leaving my stronger cavalry on the left where it did no good.  I also should’ve thrown my general into the fray, since he wasn’t the commander in chief.

In the mean time, Steve was doing better on the opposite flank.   His bad going troops and my spear in the middle outnumbered the enemy’s mid-pip command.  He had control of the flank to the extent that a coordinated attack between the spear and his auxilia could fold the flank easily.

But there were a few problems. One was bad die rolling on our part, of course.  Another was the fact that even if we did turn that flank, it didn’t contain Jim’s commander-in-chief, so it wouldn’t be enough to win the game.  But most importantly, time was running out.  My right flank mission should have been to delay the larger commands, but my impatience got me into trouble and didn’t give Steve the time required to win on his side. 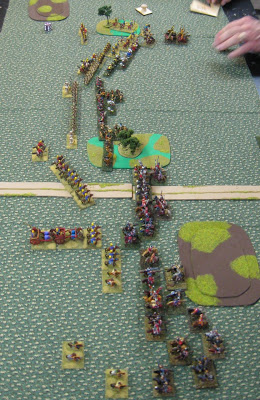 The final image here shows the Middle of the End.  I do think bad die rolls had a disproportionate effect against us on our left flank; we were in a pretty good position overall.

On the right, we had no chance.  By retreating I was able to close the gaps in my line somewhat, but my line was stretched thin and Jim’s had plenty in reserve.  I eventually lost my 5th element there (it wasn’t love), and the command was demoralized.

We were still in the game, but not for long.  We had one turn for me to make an effort not to run away before the spear command was also demoralized and we lost.

I learned a lot, and had a good time despite losing.  In order to fix the game, I think I’d have to change almost everything I did: splitting the commands, deploying terrain, and deploying the army.

In retrospect, my initial split that included 2 psiloi with my cavalry might have helped a lot.  Those two psiloi would have done a good job in the bad going, delaying Jim’s auxilia and protecting my spear’s flank.

But if I had 2 Scythed Chariots instead of psiloi, those would also have helped in my cavalry command, by giving me a bit of punch and increasing the size of the command without a penalty for losing them.

I wonder if the other two commands would’ve worked better if I had given 3 spear and a psiloi to the bad going command.  Steve could’ve used the spear in the good going, and helped the situation overall by reducing pip demands on the central spear command.

One more tweak and it looks even better: give one more Psiloi to the low-pip command to link with the cavalry, and I’d have a 10/10/16 split, which is ideal for break points.   Then, the main problem would be deploying two of those commands without either giving away too much information, or compromising one of the low pip command’s flanks.

I think in order to have any chance of sucess with BBDBA I’ll need a lot more practice with single-army games.  But I enjoy the game even if I fail at it, which is always a good sign.

Thanks for another good night of gaming at Legions, everyone!