I purchased some DBA army packs “not for a squeamish General” from a denizen of the Fanaticus forums.  These are packs assembled from mixed manufacturers, and might not contain all of the army’s options, but they’re playable and inexpensive.  The first I’ve painted is Early Bedouin.

I have no particular attachment to this army, or I’d have gotten a more quality-controlled army pack.  It’s also an easy paint job, so I decided to do some experimentation and try some new techniques.  In the past, these experiments have succeeded, so I forget that sometimes they don’t.  Although not everything went as smoothly as I had hoped, it’s a playable army that looks basically fine in the end; but it’s not my favorite paint job.

The infantry are all Essex Midianite figures, appropriate for the Early Bedouin (c) list. The light camelry and camelry that match it are also Essex, but they originally would have two riders per camel. The other non-general camelry stand is from Falcon Figures.  They’re the worst figures in the lot: the camels are far taller than the rest, and are smooth like dinosaurs.  The men look like pudgy cave men with poorly defined faces.  I don’t know which manufacturer made the General and companions, but their armor, robes, and turbans are definitely out of place in an army this early.  I can only assume they’ve faced some Persians and Medes and stolen their fashion magazines.

Unfortunately, the army pack came with 4 oddball figures for the Auxilia: a Nubian, a few Philistines, and an inappropriately elaborate standard bearer.  Luckily it also came with twice as much Psiloi as was required, including some slingers that were easy to convert into additional javelinmen for the Auxilia.  The guys holding their javelins low were originally slingers. 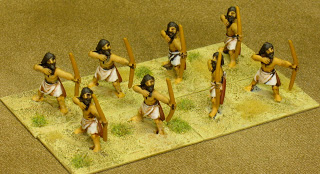 I used only bowmen for the psiloi, to make it less obvious that I converted slingers for the Auxilia.

I tried a new technique on the bases: I used spackling compound to blend the individual figure bases smoothly into the base, and a dusting of sand for texture.  For both the psiloi and auxilia, I based the figures prior to painting them, and this worked out great. Thanks for the idea, JM! 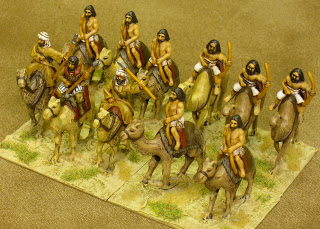 The color progression for the sandy base came from a Flames of War article about desert basing.  I chose the Middlestone/Tan Yellow/Buff colors.  Unfortuantely this didn’t do what I intended, but it looks fine in the end.  Middlestone is very green, and Tan Yellow is pinkish (flesh colored).  Buff goes well with Middlestone, but the overall effect is not “sand” if you look at it closely enough.

This is my first army with Camelry and Light Camelry.  For these stands, I painted the figures first and then applied spackle after basing them.  Unfortunately this resulted in a few white spots on the camels’ legs, but overall it worked well.  I could’ve painted the Light Camelry when it was already based, but probably not the 3 camel stands.  To affix the sand to the base before painting, I sprayed with dull varnish prior to painting.  Usually the primer takes care of this, but not if your figures are already painted.  I used Army Painter dull varnish for the first time on this army, and it came out almost as dull as Testors Dullcote at a lower cost: that change was a success.

The other thing that didn’t work as well as I had hoped is the flesh color.  I started by trying a new color, Vallejo Dark Flesh.  I prefer Tan Yellow for a middle eastern flesh color; Dark Flesh is too orange.  The inking didn’t work well either.  I used my now-standard Didi’s Magic Ink, which usually works well, but it needs to be applied over very dry paint.  I applied it too soon after painting, and it pooled and caused some very dark spots.  I mostly fixed these problems with Tan Yellow highlights, but the shading is a lot more harsh and messy than I prefer.

I look forward to seeing this army in action!  With all these light troops I don’t expect it to perform particularly well against any random army, but I can’t wait to see what the Camel General can do against enemy mounted: it’s even odds against an elephant.