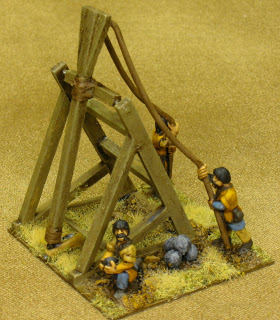 This is the traction trebuchet (human-powered stone thrower) I built for my DBA army IV/35: Mongol Conquest.

I purchased a Perrier (traction trebuchet) model from Museum Miniatures, but it’s way too big to fit on a DBA 40mmx40mm base.  I also think it’s stretching the upper size limit of historically used human-powered trebuchets.  So, I decided to find a design that would fit on a base and scratch build it.

The crew is from Museum Miniatures, and was originally intended to man their trebuchet.  These guys are monsters: they stand about as tall as the rest of my Mongols, but those guys are riding horses!  The only reason they fit in with the rest of the army at all is because they’re on a separate base with a big machine. 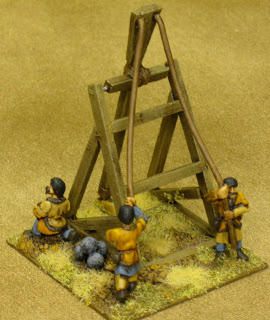 The catapult itself is constructed from balsa wood, thin brass rod for the pivot, and thread for the small ropes on the throwing arm.  The pulling ropes came with the crew figures.  The stones are round pin heads.  I used greenstuff to build up the cloth-looking sling around the loaded stone.  The base has sand glued on, and it’s finished with some flock and static grass to match the rest of my Mongol bases.

The design of this trebuchet was based on an image I found online of a reconstructed Mongol traction trebuchet in a museum, as well as images in Osprey’s Siege Weapons of the Far East (1).  The reconstructed trebuchet has no size reference, but looks about 6′ high judging by the sign placement on the wall, which seems too small.  The images in the Osprey book are primitive contemporary drawings which make it look as if the catapult should have a hundred crew pulling its ropes.  I opted for something in between: small enough to be relatively portable but not so small that you’re better off not bothering.

The Mongols used a variety of siege weapons as they expanded their empire.  They learned how to use gunpowder when they conquered China, and gained a lot of experience sieging cities.  I wanted my Mongol army to represent the time of the European invasion: the early 1240’s when the Mongols defeated Russian, Hungary and Poland.  Accounts of the campaign in Europe describe the use of stone-throwers, but don’t mention the rockets or cannons that were used elsewhere (and later) by the Mongols.

In retrospect this design is possibly a bit too tall for the size of its base; and clearly it’d need a larger crew.  But it’s a lot more usable in DBA than the Museum model.