On Saturday I attended Stoogecon for the first time.  This was the second DBA tournament-type event I’ve played in.  I had a lot of fun, and hopefully learned a few “what not to do” lessons.  My goal was to win at least one game, and I won 2 (out of 6).

I don’t know if my experiences so far are typical, but my overall impression of DBA tournaments is that they’re basically just like friendly DBA gaming days, but you play more games against more people you don’t usually play with, and people aren’t quite as willing to tell you when you screw up.

There were 7 of us: Larry and Rich were running the event; Kevin, Jim, and I were also local; John came in from out of town and I’m not sure if Mike lives in Pittsburgh or was just visiting.

The first event was an open: Rich played, and Larry sat out to run things.  I hadn’t decided whether to play II/4c Warring States: Chao, or III/10 Hindu Indian, and didn’t have a strong preference.  Larry’s taunting convinced me I’d suffer less if I didn’t take the elephants, so I played II/4c. 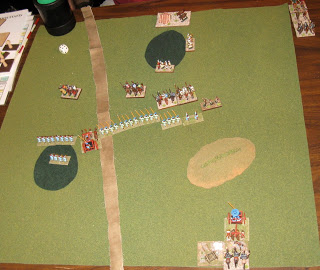 My first game was against Kevin, who played Ayyubid Egyptians (IV/20).  I defended and placed one of my typical terrain setups: two woods and a steep hill at the corners of a triangle, disrupting deployment zones.  I deployed my spear line between bad going, with my bows to protect my left flank and my light horse screening the right.  Kevin attempted a wide sweep around my right flank with his light horse, which I repelled, and then sent in some cavalry.

He ran out of steam when he got around the hill and out of command radius of his general, but he did manage to take my camp.  That left the game tied at 4-4.  Taking back the camp was my surest way to win, but my general was out of range, so I’d need to hold out for a turn or so.

I got to the camp without losing any other elements, and the odds were in my favor: 5 to 3 with a quick kill gave me a 26/36 chance of success.  Unfortunately, the combat was tied, and play continued!  On Kevin’s turn, he killed my Psiloi, but lost the camp, so I won 5-3.

This started a few trends for the night: I only ever beat Kevin, and all of the wide flank attacks failed.  It was also the first game I’ve played where a camp was taken. 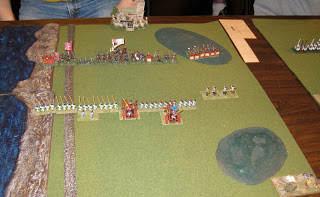 My second game was against Rich, who played Italian Condotta (IV/61) as the defender.  This was a much more straightforward “line ’em up, knock ’em down” game.  There was a bit of back-and-forth between our bows on my right flank, but I lost on the left flank where my spears were crumpled by his knights.  Although “Diceman” had uncharacteristically good die rolls, I should have learned not to try to win against knights with my undersupported spears.  Rich won 5-2 in the end. 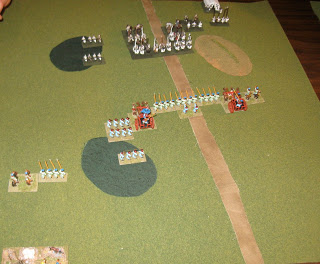 In the final round of the open, I played against Mike’s Teutonic Orders (IV/30).  I defended and placed a slightly different triangle of terrain.  As you can see in this picture, I didn’t learn any lesson regarding knights and spears.  The game went very quickly once we made contact: he crushed my spear and the psiloi behind it, and then an additional spear in two of the first three combats.  I managed to kill one element, I don’t remember what, but he killed one more element and I was done.  He won 4-1.

John won the open and took home an Essex Maccabean Jewish army pack to complement the Maccabeans he brought for matched pairs.

For the Matched Pairs event, I brought Later Spartans (II/5a), and Later Achaemenid Persians (II/7).  The Spartans had all the non-Spear options possible, and Persians chose 4 spears and another psiloi instead of a scythed chariot.  This time, Larry played and Rich sat out. 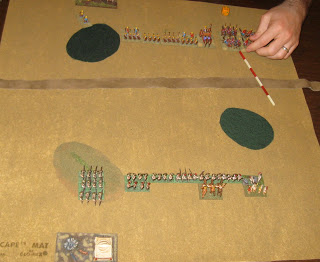 My first game was against Kevin again, and we played with my armies.  Kevin chose Persians, and somehow the Spartans ended up defending.  I set up virtually identical terrain to the first game we played (oops), but we ended up on different sides.  Once again, Kevin attempted a sweeping flank around my right side, to get to my camp.  But this time, he stopped too close to the woods, and I rolled a lot of PIPs on my first turn.  I sent my psiloi into the woods, flanked one light horse, and killed it (or pushed it off the board).

This game demonstrated again the difficulty of flanking attacks around terrain that blocks command.  I don’t remember anthing other than the complete failure of his flanking maneuver: I won 4-0.

The next game demonstrated that you learn a lot more by losing than by winning.  Unfortunately I don’t have any pictures of this game, but I played against Larry using his armies: Athenians (II/5b) vs. Thessalians (II/5d).  I chose the Thessalians with the light horse option.  I defended and played less terrain than in my other Arable games, but still placed it in the deployment zones.

Can you see where this is going yet?

Yes, obviously: I attempted a wide flanking maneuver around the woods at Larry’s right flank.  I got into trouble when my light horse were out of command, and he destroyed most of my attacking force.  I managed to pull some of the light horse out, but shortly after our main lines clashed I lost 0-4. 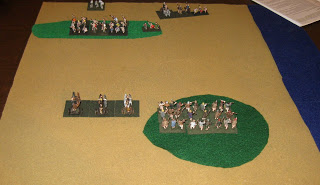 In the final round, I played against Mike again.  We used his armies, and I chose Scots-Irish (II/54) against his Picts (II/68), both with the Warband option.  He defended, and placed a long marsh and large wood opposite his waterway.  We played with the waterway to our side.  We both deployed with our infantry in the bad going and our cavlary in the open.

My first move was to send my chariots across the board in front of my infantry to try to take on his cavalry force and avoid his spears.  In retrospect, it would obviously have been better to just deploy on that side in the first place.  The rest of the game was a bit of a muddle: it ended up being a bunch of disconnected skirmishes that clashed before our main lines formed ranks, so most of the kills were attacks of opportunity and not a clash between two straight lines.  Overall I think that may end up a bit better for the Auxilia when it’s fighting against Spears, and it’s probably not unlike historical fights between Picts and Scots-Irish.

I killed off his light horse, and failed several attempts to flank and kill his general.  In the end he beat me 4-2.  It was an interesting and hard-fought game whose outcome was never obvious, but we also both made mistakes and suffered from them. 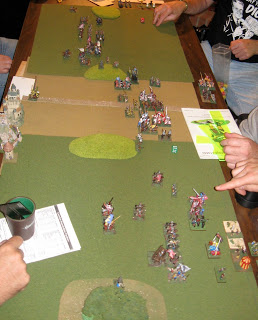 It was still early, so we threw together a triple game of Knight armies using allied commands on a 2×5′ board.  On our side, John was on the right flank facing Kevin; I was in the center facing Jim; and Rich was on our left facing Larry.

We basically just lined up some useful matches and pushed ahead. Kevin’s command broke first, but that’s just because John’s knights were running the fastest.  I managed to kill off 4 of Jim’s elements in the middle when we clashed, and that ended the game because he was the C-in-C.

This was a very straightforward lineup: there isn’t as much subtlety in BBDBA style games when you have three allied commands instead of variable command sizes.  I continued to learn that I don’t find double-depth knights very useful.  I did inadvertantly learn a useful tactic against them, however: if you aim bows at their front corner, they won’t necessarily have enough room to contact you due to their extreme length.

This was a good day of DBA, I’m glad I attended it.  I enjoyed facing opponents and armies I don’t usually play against.  Thanks go to the Stooges (Larry and Rich) for organizing this shindig and providing a full day of meals (donuts)!