I finished painting my Tlingit army.  The camp will wait a bit while I finish some other projects.  Here’s the whole army: 10x3Bw including the general, and 2x2Ps.  Since the main body of the army is bows, I decided to use melee troops for the psiloi.  The only sources I’ve read about Tlingit fighting suggest that they’d be better classed as warband.  At the Battle of Sitka they apparently rushed at the enemy in an attempt to win individual combats, and didn’t shoot en-masse from a distance or advance in formation. 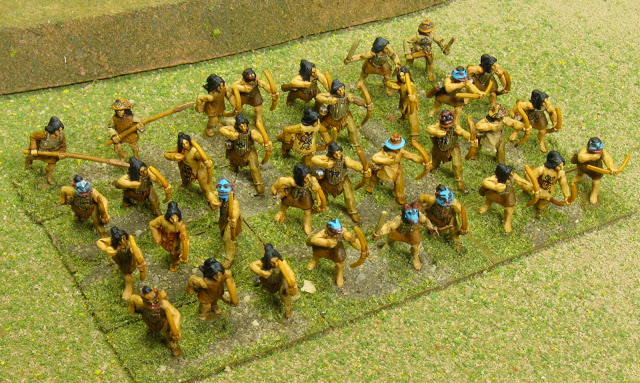 On the other hand, most folks seem to agree there weren’t enough of any North American warriors to build a “real” DBA army.  That really doesn’t bother me: I painted these guys because they look cool, what more do you need?

Here are pictures of individual elements.  On the right side of this image is the General, distinguished by melee weapons, and the fact that all three warriors are wearing helmets. 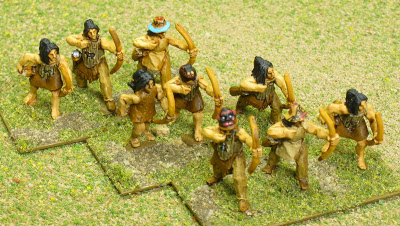 I looked at sources on the Internet for inspiration to paint the patterns on the helmets, armor, and conical hats.  My patterns are paraphrased versions of the real patterns, but the overall effect should be similar.  Most of the helmets were done with a brush and paint, while some of the fine black lines on armor and hats were done with a Pigma Micron pen, .005″. 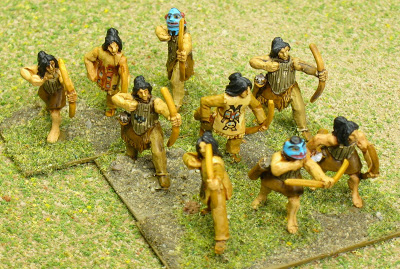 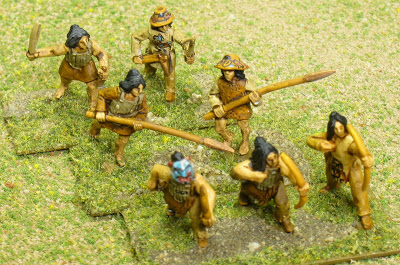 Almost all of the helmets and armor patterns are taken directly from specific images I found online. Some of the helmets are patterned after modern helmets carved and painted by Tommy Joseph: specifically, his Wolf War Helmet and a human helmet whose images I can’t find anymore.

Other designs, including all of the hide armor patterns, are inspired Tommy’s pictures of Tlingit artifacts in museums around the world, which are available only on his Facebook pages.  One of the helmets (top center in the second detail picture) is patterned after a Shark Transformation helmet, depicting a human (on the front) transforming into shark form (on the rear).

Overall, the coloration on most helmets seemed very uniform. Faces of humans and most animals were copper/tuquoise blue, with red (iron oxide?) on the lips, nostrils, and ears.  Eyes, hair, eyebrows, and other details were black, and teeth are inlaid in white.  Depending on the specific animal detailed, portions were left wood colored, painted white, red, or black.  The blue paint I chose was somewhat more blue than it should be, but I had a very hard time mixing a blue-green that didn’t read as “way too green” at this scale.  Some animals (bears) are depicted with a black face, but lips and nostrils are still red.

On the wooden slat armor, I painted the body of the armor khaki, similar to the color of the fresh bindings shown on Tommy Joseph’s reconstructed Tlingit body armor.  I detailed the exposed wood portions at the edges with a lighter yellowish wood color.  Historical artifacts all show much darker wood and bindings, but those are hundreds of years old.  I expect in battle, the armor would look much newer.  Many of the wooden armors have a detailed crest on the chest, but some are plain or have patterns of exposed wood between the bound areas.

I didn’t find any evidence for the colors used for bows or arrow cases. I expect both were more decorative than I’ve depicted them here, but I’d rather err on the plain side just in case.  I don’t think any of the arrow cases are visible in pictures here anyway.

I’m very happy with the way this army turned out, but I don’t have a lot of hope for its prospects in open battle.  Luckily there are two North American theme events at Fall-In 2010, so I’ll have a chance to win a battle with them.

Overall, I like the Eureka sculpts.  It might have been better for me to choose a different mix of helmet/armor options, but another limiting factor is in the shapes available for the helmets.  They are far more limiting than the wide variety of animal shapes used on real Tlingit helmets.  The other problem with the Eureka sculpts is that they don’t use a large enough collar: I think the helmets should be sitting much higher than they are here, compared to the head height of the warriors without helmets.

I sat on these half-painted figures for a while, worried that I’d wreck them by detailing the helmets and crests.  I’m glad I finally jumped in and finished them, because I think they turned out quite well.