I’ve completed the elements necessary to field two Warring States Chinese armies at the same time, or a double Chao army.  It’s been hot in the attic so I haven’t gotten a chance to take pictures for a while. 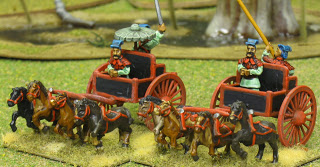 All of the figures are Museum Miniatures.  Overall I really enjoy working with these figures.  There is very little flash or other cleanup required.  The poses are limited, but I like the overall effect in this army.  The infantry has enough detail, but not too much, and lends itself to a clean simple color scheme. 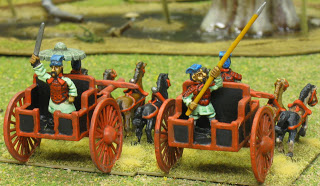 I’m not quite as happy with the green army chariots as I am with the blue ones I painted a few months ago.  I mounted the umbrella too low on the general’s chariot, and didn’t paint the red quite as well.

For the cloth, I used a light base coat and mixed a wash from darker paint, gloss varnish, and water until it flowed well over the cloth.  A few highlights on top finished it off well. 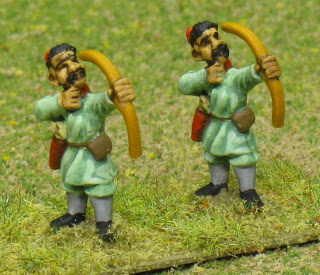 The blue army started as II/4a: Qin, but I quickly decided I wanted to morph it into other Warring States armies.  The first morph was into II/4c: Chao, but along with the green army I can now morph into any of II/abcd with all options.  I’m missing the 3Bd and 3Cb elements for II/4e. 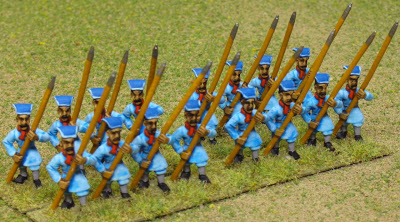 I chose to model the warbands with halberds to differentiate them from the spearmen (shown here).  According to the DBM army lists, the same troops are categorized as warbands in the Qin army and spear in other armies, due to their different motivation and not different weapons: Qin soldiers were paid by the head. 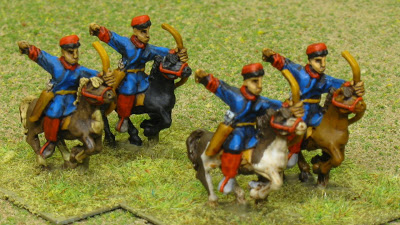 The light horse is the only element I needed to match colors with an existing element.  It’s not identical but they’re close enough that it makes no difference.

This is all the Chinese I need to paint for our planned BBDBA tournament at Fall-In; but it’s fun, so I could forsee getting around to painting some more.  Maybe I’ll build enough to morph into a double army other than Chao, or maybe into Han.