There were two niche events covering the same theme: American armies.  Since I had painted my Tlingit (IV/11) and a camp, I originally planned to play in both events.  After playing in the first event on Friday night, I was uninspired to get up early on Saturday just for my bows to die versus Warbands again. 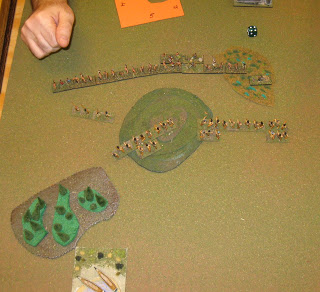 “1491” was a pyramid format event on Friday night.  In this format, the first round is a series of 1-on-1 games.  In the second round, the winners and losers are combined to form two player teams who play each other, carrying over their losses from the first round.  Luckily we had 8 players, allowing the third round to be two full four-on-four games.

I’ve enjoyed the Pyramid format in the past, but unfortunately I didn’t have as much fun this time.  Although I really like the way my Tlingit look, the Northwest Americans (IV/11) just aren’t very competitive against their contemporary enemies.  They have 10 bows, and I didn’t play against anything except warband-heavy armies in this event.

In the first round, I lost against Ted Galacci, 4-1.  In this event, they matched one game’s winner with the other’s loser, to enourage you to really wipe out the other guy.  In the second game, Bob Beattie was my commander in chief, and JM played under Ted’s leadership.  Our side won 7-2, which sent JM and Ted to play under our enemy’s C-in-C; and we got Mike Guth and another player whose name I unfortunately forget; he left early.

By the last round, both sides had 25 elements.  Or was it 27?  Maybe 26.  I think it was 25.  In any case: this was four players playing about 2 armies worth of elements.  We rolled 4 PIP dice and they were assigned by the C-in-C appropriately.  This left us with almost twice as many PIPs per element compared to a normal game, giving a relative advantage to warbands and players who maneuver inefficiently.

In the end, we lost.  JM’s three remaining elements apparently killed more than their weight in gold… shiny, Aztec gold.

The goal of matching winners with players who lost to someone else was to encourage players to kill as much as possible instead of making arrangements to lose with minimal losses and gain an advantage in later rounds.  I’m not sure this worked out as well as it was intended to.  I don’t think it was as satisfying to play under the command of someone who didn’t beat you; and unless you made an effort to avoid it, it was easy to end up playing against your original opponent in subsequent games.  Finally, I think the game works better with more elements in play during the later games.

I’m currently not very inspired to play my Tlingit.  They’re pretty, but 10 bows and 2 psiloi, while flexible, don’t leave much room for deception. I think I’ll have to let them sit on the shelf for a while to rebuild my interest.

I am interested in trying another Pyramid format event.  JM and I discussed it on the way home, and decided that Samurai armies would work well in this format.  Battles between individual Samurai and joining forces against a common foe feel just about right for this period.