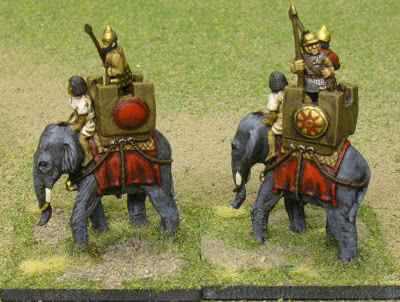 These are interesting models.  The sculpting is quite good, and the end result is completely satisfying.  However, I have several complaints about my overall experience when building and painting these.  These concerns are likely my problem more than Black Hat’s.

The most noticeable difference between this elephant and the rest I’ve built is how they are assembled.  The elephant, including its head and the driver, is sculpted in a single piece; the box on the back and crew are separate castings.  Black Hat did a wonderful job maintaining a high level of detail with a single casting.

You’d think that assembly of a two piece model would be easier than elephants with two body halves and a head, with an optional howdah.  Nope!  Unfortunately, the boxes for their backs were filled with flash that is difficult to trim out, and then the box doesn’t fit on the back of the elephant without a lot of trimming.

The shields molded on the side of the elephant are a bit oval, I’m not sure why.

The crew figures are also quite odd, though it doesn’t show at all on the final model.  From the waist down, they look like they’ve been packed in a box on the back of an elephant for a year of campaigning… so I guess that makes them accurate?  The crew are flattened from the waist down.  Detail of cloth and armor is still there, but it’s all squashed.  I’m sure this is to allow the figures to fit in the box, and it’s not visible once they’re in there, but it looks weird before you assemble everything.

While I was painting this elephant, it felt miniscule, like a pigmy compared to other elephants I’ve painted.  However, once I actually compared it to other elephants, it doesn’t seem that small.  It’s definitely smaller than an Essex elephant, but it’s not as small as the Museum or Chariot models. It’s tall and skinny, but not as long as the Museum elephant.  The ears are tiny.

I’m not very happy with the proportions of the elephant compared to its crew.  The crew is bulky and the box looks huge on its back.  I think this adds to the feeling that the elephant looks small.