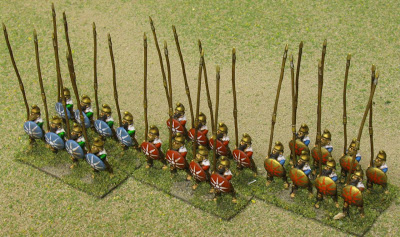 Here are some Chariot Miniatures Alexandrian Successor phalangites.  I painted them to have better pikes for my Lysimachid army in the Two Davids Successors campaign at Cold Wars.

Overall, I like the figures quite a bit, and they turned out well with minimal effort due to my cheezing out and using Army Painter dip.  Chariot Miniatures are nicely sculpted with nice deep details that take ink well.  The poses tend to be a bit more static than modern sculptors, but I think this works well for regular heavy infantry.  They’re slim and slightly smaller than Essex figures, but close enough to be compatible.

I have only two minor complaints about these figures.  First, their right arms are too short.  You’d have to go out of your way to notice this if you aren’t painting them, however.  My other complaint is more about the Magister Militum web site than the figures themselves.  These pikemen have beards.  I wanted pikemen without beards.  However, these seem to be the only successor phalangites in the catalog that have beards, and also the only ones that were photographed from the rear on the website.  Doh!

I had trouble resisting the temptation to paint a stand or two as garden gnomes; the beards and hats made it almost irresistable.