This past Saturday was Congress of Gamers in Rockville, MD (just outside DC). I was afraid I might not make it to the De Bellis Vasingtonium (DBA open) event, because we were going on a long family weekend… to DC.  I’m glad Marla argreed to let me leave them at the zoo for most of Saturday.  Thanks!

The events I didn’t participate in included a lot of open board gaming along with some organized board gaming events such as a racing series.  There weren’t many miniatures games other than the ones organized by “the DBA crowd.” Unfortunately I wasn’t able to participate in the Wings of War Balloon Busting event either, due to time constraints.

I really enjoyed the format of the “Bring-and-Buy,” where you drop off your old board games and hope someone buys them.  I didn’t bring any games due to timing, and didn’t end up buying anything because the prices were high compared to the size of my wallet and my desire to own the games.  But I think in future years I could sell off some of my games fairly easily since I wouldn’t expect to get as much as they were asking for theirs.  I also missed participating in the no-ship math trade. 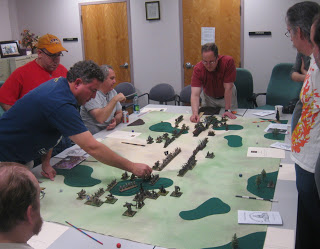 Hordes of the Things

I arrived too late to play in the Hour of Wolves and Shattered Shields event, a Hordes of the Things giant battle scenario set up by David Kuijt and Dave Schlanger.  I did get a few pictures: here’s an overview of the whole battle.

This scenario was based on the Battle of Dale.  This battle was left out of the movies, and the main characters weren’t there so it was chronicled in less detail in the books as well.  Around Dale in the North of Middle Earth, Dwarves, Elves, and Men faced the forces of Sauron: mostly Easterlings (evil men).

In HOTT terms, each side had 108 points split into 4 commands, good guys vs. bad guys (aren’t they always?)  As in the Giant Battle rules, all players on a side played simultaneously.  Although this can slow things down given enough players, I think I prefer the “long line” battles over the more free-for-all format used in the Two Davids Monsterpocalypse themed HOTT games.  I should probably actually play a normal Giant Battle before I settle on that decision…

All the figures were Games Workshop, mostly Lord of the Rings figures (with a few pigeons from the Warhammer elf line.)

As it turned out, only an “hour” of wolves and shattered shields was a bit optimistic. When everyone finaly cleaned up the Battle of Dale, we started De Bellis Vasingtonium: a 4 round DBA tournament open to all armies.

I couldn’t decide whether to take Feudal Spanish (III/35b) or Later Achemenid Persians (II/7), so I brought Hittite Empire instead: I/24b.  I chose the psiloi option, giving me a final composition of: 3xHCh (gen), 1xLCh, 6x3Sp, 2x2Ps.  Except for its lack of bad going troops, this is a fairly solid composition, especially for 1200BC.

I thought I might face another early army, but JM’s Greco-Indians were the earliest possibility, so we played each other in the first round.  “I came all this way to play against you?”

I attacked and JM set up basically a pool table, which suited us both just fine.  Early on I denied his elephant flank and concentrated on his other side.  I didn’t win this battle, JM lost it 2g-0.  Our battle lines seemed fairly well matched, but after the first few bounds of combat, JM misused a 1-PIP roll and left his General open to being outflanked, so I killed him.

Apparently JM stopped making mistakes early, because this was the only game he lost.  Congratulations on the 3-1 placing, that’s excellent!

In the second round, I faced Doug Austin’s Bosporins.  I’ve faced these guys twice before in BBDBA but never in single DBA.  I was the attacker, and Doug set up symmetrical terrain with two roads and a central wood.  He set up in a tight block with his bad going troops poised to run down the road and take my camp.  My plan was to run as fast as possible towards his knights while expending the minimum force necessary to distract and delay his light troops… who were running twice as fast towards my camp.

In the end, my expectations were met and my plan ended up working, but the timing and some luck went in my favor this time.  His plan was complicated somewhat by a greater need to consider his general’s command radius due to the woods, but mine was limited by the speed of my heavy foot.

He moved to within striking range of my camp before pulling back his bowmen to try to kill my general.  In the mean time, my spears and mounted troops finally reached his knights and I started gaining an advantage there.  He was even able to shoot several times with his artillery, which he deployed on his base line.  In the end I took his camp with my LCh, and won 3c-1.

I decided to use “before” and “after” pictures here, because the contrast is so striking.  After Doug ran down the road and I ran up the open ground, we ended up almost perpendicular to our starting deployments, and Doug had turned my “flank” (my original rear).  Apparently his bowmen thought my wall was too high, because he didn’t end up attempting to take my camp.

I won two games in a row? Weird!  Unforutnately things started going down hill from here.

In the third round, I faced Mike Guth and his Medieval Portugese time travellers. This seemed like such an ahistorical matchup that even a bystander asked something like “what are you… why…. what?” In reality, they were just using their time machine to get some practice in before sailing to North America.

I don’t have any pictures of the start of this game, but I defended and set up terrain with a small wood on either side of a road.  I deployed with my spears in depth in the center (double ranked with psiloi support) and mounted on the flanks, to defend against a central Knight assault.  In retrospect I think a thinner line would’ve been more flexible and less intimidating to him.

The Portuguese and Bostporin army compositions are similar, but with more heavy foot in the Portugese.  I don’t remember Mike’s setup.

He pulled a psiloi rush on the first turn.  He didn’t kill my LCh, but did really annoy me for the entire game.  That psiloi required a huge PIP expenditure for me to defend against, and the best I got was a stalemate. Finally, he took my camp with his auxilia and won 2c-1, with about 1 minute before time was called.

It was definitely a good move for him to do the psiloi rush even if he didn’t kill me, because I was definitely set up incorrectly to handle it. I put two mounted on that flank, because as soon as I was free of the woods they could move out to their flank and be more useful… the problem being that they were never able to move past the woods.  I may have been able to deal with it better if I had spear and psiloi over there.

I don’t have any pictures at all of the final game, which is probably just as well.  I faced David Kuijt’s Hussites, and basically beat myself with a bunch of mistakes to go along with my lack of experience with or thought about Hussites (or war wagons in general).  My only consolation is that I learned more than DK did 🙂

First of all… a gentle hill is not bad going, and you should ask what kind of hill it is before you decide which board edge you prefer.  After deploying incorrectly because the hill was not actually protecting my flank, I failed to correct my mistake and wasted PIPs maneuvering around the hill even though it wasn’t bad going.

Hussites have war wagons that are superior to my mounted but inferior to my spears, and blades that are superior to my spears but lose to my knights.  His initial set up let him swap his elements to ensure he had a few hot spots that he could take advantage of and poke holes in my line.  I’m not a very good element dancer, so I didn’t see much advantage to trying to swap elements into good matchups as I advanced… but I hadn’t considered that the PIP sink of the war wagons would’ve prevented him from swapping back as easily.

But that wasn’t the last of my mistakes.  Without much enemy mounted, my psiloi were wasted in the spear support role I put them in: this is a mental block I need to get over.  They don’t die to anything in his army except his light horse, so I should’ve had them out in front, extending my line or at least preventing flank maneuvers.

I hadn’t even considered the effects of massed War Wagon and Artillery firing on my lines.  That’s pretty brutal.

In the end, he outflanked my short line with his light horse and general… but his 4-0 victory came from slaughtering my line in head-to-head combat while making me spend all my pips on my flank.

In general, I have a problem with beating myself when playing DK by paying more attention to what he’s doing than to what I’m doing… but this time I made some big mistakes that I should not have, and that made it even worse.  Larry wouldn’t have admitted to knowing me after seeing that game.

In the end, I finished in the middle of the pack with a 2-2 record, which surpassed my expectations but not my hopes.

I had fun at Congress of Gamers, and if there are enough events I’ll try to make it down again in future years… but the hotel cost may be too high to make it worth it if we aren’t planning a trip down there already.