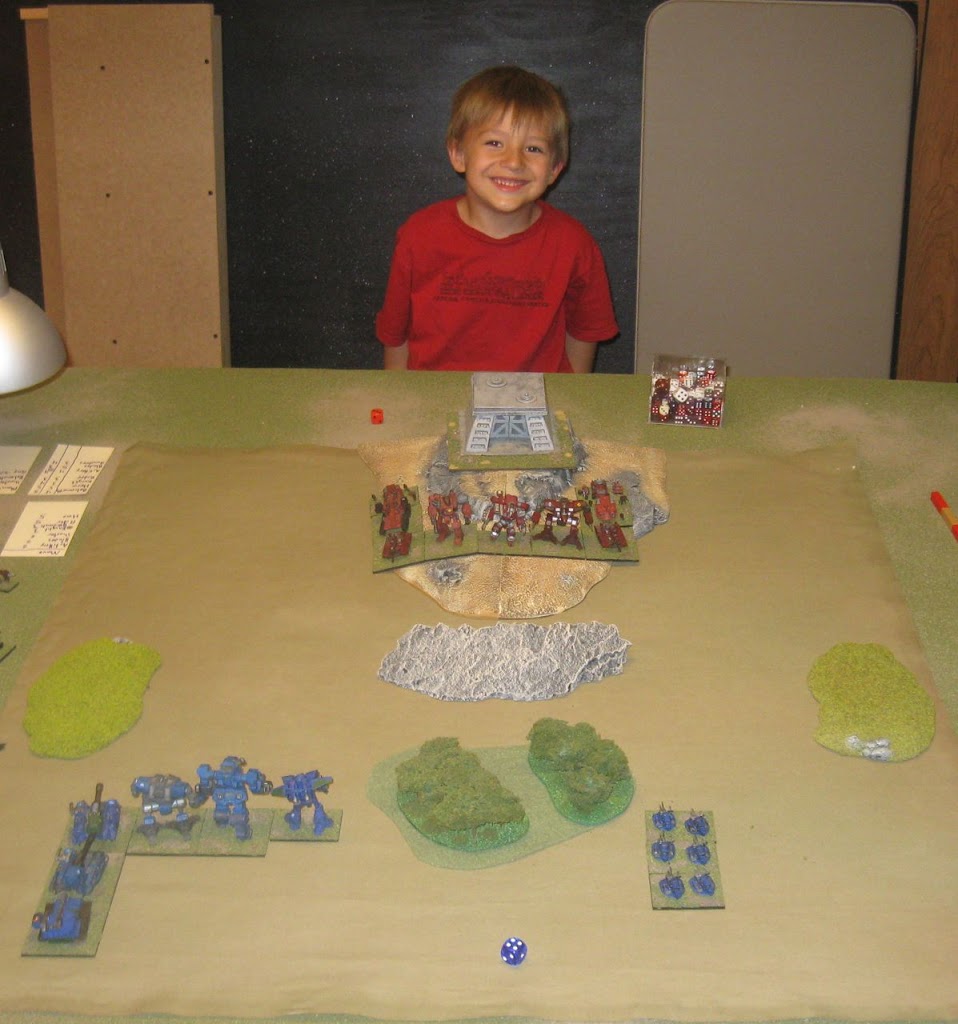 My son Ezra is now 5 years old, and he has enjoyed playing games of all sorts for as long as he’s been able to play.  Here are some of the games we have enjoyed playing together so far.

He has a great capacity for learning game mechanics, and a long enough attention span to finish a game that he’s truly interested in.  Most of the time he’s able to handle loss well enough to want to play again. The biggest challenge I’ve had in finding good games to play has been that he’s only just starting to learn to read.

For now I’m limiting this list to games that adults can play with kids, and those that are surprisingly appropriate for children (or at least for Ezra) instead of the ones everyone knows work well with kids.  This isn’t a game review, and I won’t be teaching how to play the games; but I will mention any changes we made to make the games more playable.

One of the first “real” games we played together was Cartagena.  When we first started playing, I removed the “move backwards to draw cards” mechanic and turned it into a “play one, draw one” game.  This helped him learn the mechanics and the strategy of skipping over full spots to move forward more quickly.  In the last year or so, we’ve started playing with the full rules instead, but we don’t play as often as we did.

Carcassonne is fairly commonly known to be good with kids, except for the farmer scoring mechanic.  The Hunters and Gatherers version can work a bit better, because scoring hunters is a bit easier, but I find it to be a bit more bland, and young kids still have a hard time thinking ahead far enough to know whether to place a hunter or not.

And our third entry in “Games that start with CA” is by far Ezra’s favorite and most played game.  At its height we were playing for hours on end, and I’d get sick of it before he did, but at this point he rarely maintains interest long enough to finish a session anymore.
Castle Panic is especially good with young kids, because it is a cooperative game.  You play with open hands, make plans together, and accomplish goals with each others’ help. We both prefer playing this one with the Wizard’s Tower expansion.  Although there are cards with words, they all have unique pictures, and when we were playing this game regularly, Ezra could recognize and summarize every card in the base set even though he wasn’t really reading any of them.  The most challenging aspect of this game, for grown-ups and kids alike, is to make plans for your whole turn before you start trading in your cards.

Marla found a copy of HeroQuest at a yard sale for around $3, and it was a great investment.  I’ve finished more dungeons with Ezra than I have with adults. We played this one semi-cooperatively: I played the dungeon master and controlled the two spellcasting characters under Ezra’s guidance as the party leader.  He controlled the barbarian and dwarf: Kick in the door, and kill whatever’s on the other side of it!  When there were decisions to be made involving traps and searching, I had Ezra make the decisions since he wasn’t looking at the map.

I’m not sure what it is about Heroica that encourages just about everyone who plays it to make up new rules and change the ones that are already there.  This is an incredibly simple dungeon crawl with no reading required, and it also has Lego, so how could any kid refuse? It’s theoretically competitive, but realistically players are usually leap-frogging each other through the dungeon.

I found Lionheart at a yard sale before I had any kids, and for years I attempted to trade it away.  I’m glad I didn’t, because it has been a lot of fun with Ezra.  This is a board-based miniature wargame for 2 players.  The mechanics are easy to pick up, and the combat doesn’t even require math skills.  I expect it’d be hard to find these days, but it’s a lot more worth playing than I expected it would be.

This is a fun little print-and-play area control game.  It has no language components used during gameplay, and there isn’t much for players to remember.  We play the basic rules, but haven’t had to make any changes to play well together.

Zombie Dice is a quick “push your luck” game with simple rules.  Ezra’s good at managing his risk in this game, and he’s just as likely to win as any adult.

For Zombies, we skip the event cards, and there are no other language dependent components used during play.  This makes the game a bit less fun and flavorful, and it can take longer without the help of additional weapons, so I also reduce the number of board sections we need to get through before reaching the helicopter.

I’m only listing Dungeon here because it was a major disappointment, and did not meet our expectations.  It’s too simplistic for Ezra, he gets bored too quickly. There aren’t enough decisions to make, and there is very little character development.  For a simple, fast dungeon crawl, we prefer Heroica.

This one is listed for ages 14+, but that’s ridiculous.  The truth is, almost every game with plastic or metal parts produced today must list an age of 13+ or 14+ because they cannot afford to have their pieces tested for toxicity.  We play the simple or slightly advanced versions of the rules, with no other changes.

I don’t love Uno, but there were some times when Ezra couldn’t get enough of it; and he consistently beat both his parents and his sister.  He also likes Harry Potter Uno, or Crazy Eights if there aren’t any Uno cards around.

I’ve played this with both kids a few times, but it isn’t that good with only 2 players.

This is one of the first dungeon crawl games I played with Ezra.  It’s extremely dependent on good luck to succeed, which totally drove away Martine.  Ezra fared better and enjoyed playing it, but we quickly moved on to other games with a similar theme.

Ezra loves starting games of Wings of War, but rarely finishes them.  He likes playing with the plane miniatures, and isn’t very good at flying predictably. But early on, he shot me down the first time our planes were within shooting range, so maybe that’s why he keeps coming back…

Hordes of the Things

I’ve started introducing Ezra to a few different miniature games, but at this point I have to wait until he asks to play so I don’t drive him away with my enthusiasm.  He has finished several games of Hordes of the Things, using all of the rules (all of the rules that happen to come up) but with a limited set of elements. The easy way I’ve found to introduce young kids to the game is to limit element selection to only about 3-4 types of elements, either all foot or all mounted.  Kids can remember 3-4 different combat factors, but it requires a chart if you need to remember different factors vs. foot and vs. mounted.  We played HOTT using Mechwarrior prepainted figures, limiting element selection to Behemoth, Knight, Rider, and Hero.
I’ll write more as we discover more games worth playing, but I expect we will soon start opening many more boxes once Ezra starts reading.