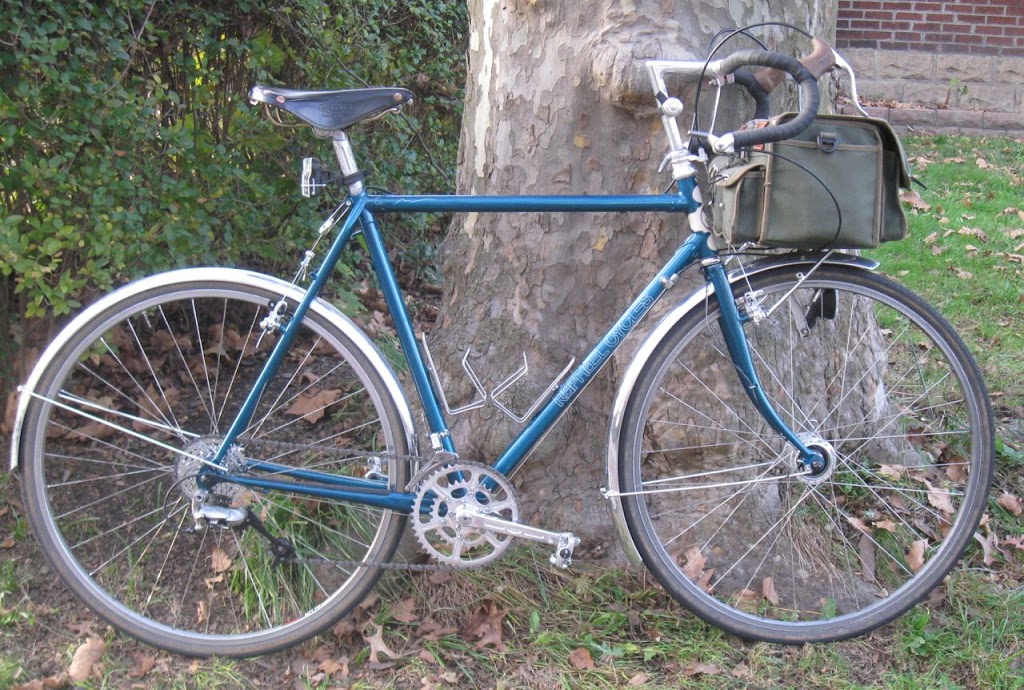 A few months ago I found a great deal on a new, hand made bike frame on the iBob mailing list.  And finally, I’ve assembled it into a great bike.

This is a Raphael Cycles custom steel frame and fork.  It was built to order… someone else’s order, not mine.  But it was beautiful, the specs seemed to fit my needs, and it was far cheaper and faster than ordering my own custom frame, so I jumped on the opportunity to buy it used (but never built up).

I built it with a mix of new parts and donations from an older bike, my blue 1983 Trek 520.  Here’s a brief summary of the build, off the top of my head:

The build went fairly smoothly, and after setting it up in the basement I’m happy to say I haven’t had to fine tune anything after my shakedown ride.  I haven’t ridden it far yet, but I plan to put a lot of miles in commuting, and hope to be inspired to take more non-commuting long rides as well.
The frame set itself is beautiful.  However, I do have a few minor nit picks with it.  To be clear, this is a better bike that is much better suited for the purposes I intend to use it for, than the bike I’m replacing.  None of these concerns are very important to me at this point, and I haven’t talked to the builder about any of them.  I don’t have any right to complain, because I didn’t order the bike nor was I involved with its specifications.
To paraphrase, I’ll quota a song by the Eagles: “I can’t complain, but sometimes I still do.”
The pump peg behind the seat tube is in a very convenient location.  Luckily I never use frame pumps, however, because I don’t think a pump could fit between the fender and seat tube.  I haven’t made the rear fender line perfectly parallel to the wheel, so I could probably squeak out a few more millimeters of room there, but I don’t think it would be enough to fit a pump.
There is noticeable fender-toe overlap.  I have not previously noticed this on other bikes I’ve ridden, even with the same size tires and fenders, on the Trek 520 that wasn’t built for this kind of setup (but has a similar geometry).
There was no rear brake cable hanger.  I used a Surly hanger, but unfortunately the seat clamp slot was quite narrow.  It required me to file down the brake cable hanger, in order to be able to tighten the seat clamp enough to keep the seat tight.  I could’ve filed down the seat clamp slot instead, but I didn’t want to break my new paint.
I’m not a fan of the overall shape of the bike when it’s set up with my preferred cockpit dimensions; though, it looks fine without any parts on it.  It was apparently specified as a 59mm frame, but the head tube makes it look smaller than my 57mm frames.  Part of this is because the fork is longer than on my other bikes, and part of it is because the head tube has an extended top, so it looks far shorter.  The stem is very high, so I could fit my front decaleur to the bag without cutting it down and refitting it from its previous use (aka “I’m lazy”).
On the other hand, there are a lot of minor details that I absolutely love on this bike.  All of the fender mounting points have threaded inserts facing the correct direction, so I don’t have a bunch of brackets and clamps all over the place to hold the fenders on.  I like the contrasting paint on the head tube (though the color is a lot closer to teal than the royal blue it looks like here).
This is my first time using the Velo-Orange 50.4 BCD cranks, and I must say: if these are easier to set up than the TA Cyclotouriste cranks they’re modeled after, then I’m not interested playing with the TA cranks.  You need a very narrow front derailer in order to be able to upshift successfully without pegging the derailer cage with your crank.  This old Suntour derailer is the only one I had on hand that would do the job at all, but I may look for a better alternative.
I’m very happy with the way this bike turned out!  I’m still not ready to get rid of the Trek that it replaced, but I have an even older Fuji frame and fork, if anyone’s interested…

Here are links to Raphael Cycles blog posts documenting the construction of this frame and fork.  It’s very interesting to see the process that went into building this bike.

Update: A few observations after riding this for a week or so: