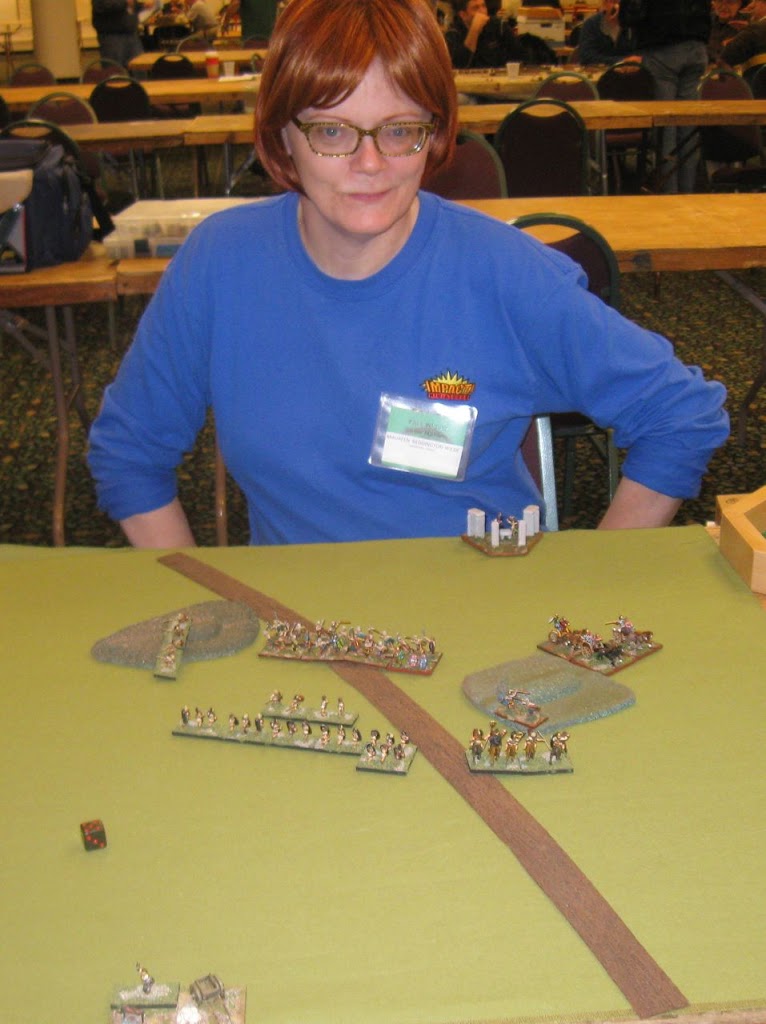 Last weekend was Fall In! in Lancaster, PA.  I drove out with Rich and Larry as usual, but unfortunately JM couldn’t attend this time.

This was an unusual convention for me.  For the entire weekend, I didn’t use any army that fought after 50AD, but my chosen army dates were even earlier: no later than about 250BC.

Thursday night, Larry ran Warbandia. Eligible armies need at least 6 warbands, and I didn’t have many choices.  I brought my Celtiberians, since I painted them fairly recently. In the first game, I beat Maureen Reddington-Wilde and her Gauls 4-0.  The second game against Mike Guth’s Visigoths was worthy of an epic poem, but unfortunately I’m no poet, so all it gets is a compound sentence.  In one turn both of our generals were killed, tying the game at 3g-3g; but unfortunately it was Mike’s turn next,  and he was able to kill one of my elements without me killing any of his, so he won 4g-3g.  In the final round, I lost to Paul Georgian and his gauls, 0-4g.

Friday was BBDBA doubles.  Since JM wasn’t around, I found an alternate partner: Chris Brantley.  We played triple Hittites, the later list with heavy chariots instead of all light chariots.

Our first matchup was against the Stooges and their Patrician Romans (East). We were doing okay for a while, but then we started rolling combat dice. Chris’s command lost 3 chariots in one bound, punching a big hole in the center of our line.  We were able to regain some ground, but not enough; we lost 6-94 after our C-in-C command broke.  We made a few mistakes in the center, such as missing an opportunity to close the door on the enemy’s general.

In the second round, we faced Will Michael and Bill Brown with their Scots Common army.  This was the most interesting Pike army I’ve ever faced, mainly because they decided to split their pike into each command and use it on the attack rather than holding it back and using it as a huge static defense.  They deployed away from their camp, which pulled us into their trap.  We deployed heavily in front of their camp, to encourage them to deploy their third command there to defend it.  Unfortunately, our C-in-C wasn’t on that side of the board, so they smartly decided to give up their camp, and concentrate all their forces on our C-in-C.  We won their camp, but we weren’t fast enough to kill 4 more elements in their C-in-C command before they broke ours and won the game.  It ended 14-86 in their favor.

Unfortunately, for the Nth time in a row there were 9 teams for BBDBA, which is just the completely wrong number to have.  In the third round we got a bye, which just sucks.  I’m there to play, not to win a free 80 points without playing a game.  I had a good time playing in the other two games, and I’m not sorry we lost.

In the evening, Chris Brantley ran Ars Militaria: a Book II event using double blind deployment.  This ended up being very interesting, but it’s not how I’d prefer to play DBA every time.

David Kuijt built stands to hold curtain-like screens across the center of the board.  After placing terrain and choosing our board edges, the curtain was put into place and we each deployed our armies based on knowing only the terrain and not the enemy’s deployment.

I brought Later Achaemenid Persians.  In the first round I lost to Dave Schlanger and his Early Gordyenes.  In the second round I beat Alex Bostwick’s Seleucids despite his attempt to force-push the terrain when I wasn’t looking.  In the last round, David Kuijt beat me with Greco-Bactrians.

The blind deployment worked fairly well without any cheesy moves taking place.  Nobody had time to find any obvious ways to break things, and the armies were matched well enough that there weren’t any problems.

However, I do think the screens affected the metagame and deployment choices somewhat.  Maneuver is more important if you aren’t sure where your enemy is going to be, which affects both army selection and deployment.

On Saturday morning, I ran DBA Matched Pairs.  As at Historicon, we only had 15mm armies show up, which was a good thing, because the 25mm boards weren’t available yet this time either.  We had some inexperienced players joining in, so we took our time to teach them well and only got 3 rounds in before time ran out.

In the afternoon, I played in the Two Davids sci-fi event, 61 Cygni: Blood, Dirt, Plasma-bolts.  This event use a ruleset inspired by HOTT, written by David Kuijt with the goal of implementing Mechwarrior/Battletech themed battles a bit better than HOTT manages.  There were 8 players on a huge board, the map of Rio de Janeiro that they used for Monsterpocalypse HOTT at Historicon.

The main problem with using HOTT for large scale sci-fi battles is that the guns are huge, but the HOTT shooting ranges are tiny to nonexistent.  David’s rules implement direct and indirect ranged fire at much more plausible ranges, while maintaining most of the feel and rules of HOTT under the surface.  Overall, the rules worked fairly well; but I think they need a bit more polish to really handle the feel of Mech battles effectively.

Unfortunately I didn’t get any pictures of this visually impressive event.

On Saturday night was the Two Davids campaign event: Death To Assyrian Oppression!  This event pitted a half dozen Neo-Assyrian Later Sargonid armies against a gamut of historical enemies.  I played Skythians.

I ended up with only 2 points, but at least it wasn’t negative!  In other news, Alex Bostwick was taken over 6 times in 5 rounds (with one suck-up tile) and came in last place with -1.

Thanks to everyone for another great convention!  I hope to see you at Cold Wars 2013.